Everyone has heard of the Amish. A common view is that there are at least several hundreds of them, and that they are a very peculiar people who still use horse-drawn buggies, in spite of living in the most technologically advanced country in the World.

This view has at least some of the truth. Today they number nearly one third of a million, equal to the population of Iceland. And they can be found far from their homeland in Lancaster County, Pennsylvania. This Walmart parking lot for Amish buggies is hundreds of miles away in Tennessee. 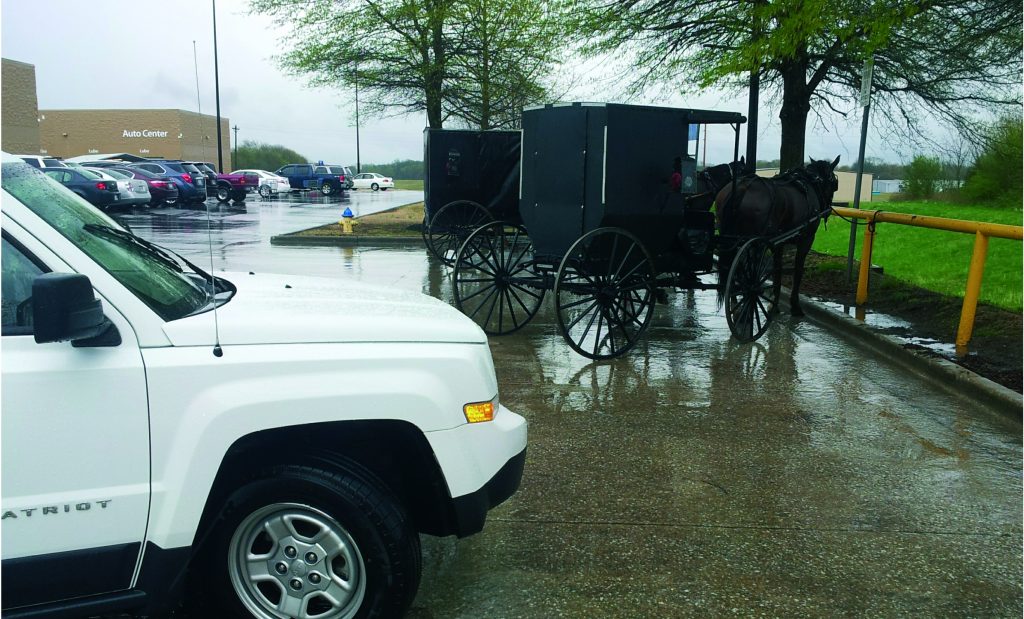 They cover a broad spectrum of practice, from Old Order Amish who are even wary of talking to non-Amish people, to more liberal communities who take holidays in Sarasota, Florida.

Their history goes back to the Radical Reformation in Europe. The Reformation was far more diverse than is commonly taught. What is normally called THE Reformation refers to the Calvinist/Lutheran part, which did not vary hugely from Catholicism. The Radical Reformers took returning to the New Testament far more seriously; among other things, they were generally Anabaptist, which meant they did not accept the validity of Infant Baptism practised by Catholics and most Protestants. The problem the Radicals had was that they were persecuted, even including execution, by both of those groups. Both had a big interest in State Power, and both were willing to use violence in all its forms, including war. The Anabaptists were non-political and peaceful. They even refused the use of violence in self-defence, so fleeing to a safer place was an obvious option for them. Many fled to America and they virtually ceased to exist in Europe.

The Swiss Anabaptists were impressed by the teaching of a Dutch radical  reformer called Menno Simons, whose followers became known as Mennonites. The man who gave his name to the Amish was a Swiss Anabaptist/Mennonite called Jacob Amman. The two groups were close in many ways, both, for example, being clear that neither political power nor violence were acceptable for Christians.

Both Mennonites and Amish still exist in the USA today, but while the Mennonites hold to similar doctrines, including non-violence, they do not look obviously different to any other American. The Amish had a very strong desire to avoid being tainted by the wider World or by pride. This is the reason for the simple lifestyle based largely on manual work, and the avoidance of things which may engender pride, such as fancy clothes, obvious wealth or nice cars. They endeavour to keep their appearance plain, modest and uniform, with nobody standing out by wearing the latest fashion or owning the latest gadget.

What makes them special is that they not only have a direct link back to the Radical Reformation, but have unique visibility and are mostly highly respected in the USA. This is remarkable given that what they stand for is in direct contradiction to what most Americans, including most American churchgoers, value. They are non-materialist, modest, will not have church buildings or paid Pastors, avoid politics, value chastity and marriage, and are non-violent (more accurately non-resistant) to the point that they will often not even report crimes against them to the Police. Sometimes they are criticised for not evangelising (which is not strictly true), but their lifestyle is evangelism in itself due to the high profile they have. They are indeed a peculiar people with a very special place in history, and provide remarkable “Evangelism by Example” in the materialistic and militaristic USA.