You will find a link below to a very short video (fourteen minutes) made by French geologist Guy Berthault over twenty years ago. Part of its significance is that it brings repeatable laboratory experiments to Geology, a science that is mainly reduced to forensic science. Forensic science, which we normally associate with crime, is science done after the event. It inevitably involves conjecture, and can never have the reliability of true science, which is entirely based on repeatable experiments. The video looks at the formation of sedimentary rock, the rock that makes up 75% of the Earth’s Crust. Sedimentary rock commonly exhibits coarse or fine stratification, also called lamination or simply stripes. This can be seen on a small scale in a single piece of rock, or on a large scale in a cliff or mountainside. 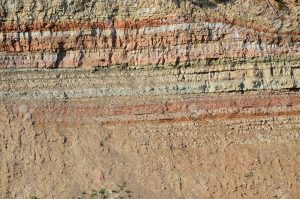 The key question about sedimentary rock is how those lines form. The standard explanation is that each line or layer is laid down separately over huge periods of time, eventually building up to several miles of thickness of rock in the Earth’s Crust. The insurmountable problem with this theory is that at all times during this supposed long period there is an exposed soft surface. This soft surface will suffer action from plants, animals, rain, frost heave, water currents or anything else happening on that surface, and therefore the neat lines will be disturbed. This standard explanation is therefore untenable. What Guy Berthault’s experiments show is that this stratification happens instantly, giving a totally opposite understanding to the standard theory. The only common ground between the two views is that the vast majority of sedimentary rocks are laid down in water. Take a little time (14 minutes) to watch the video:

The image below is the key takeaway from the video. You have now seen clearly how stratification happens instantly. 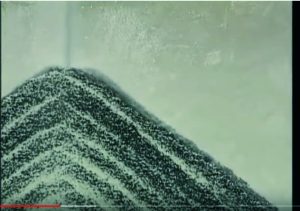 In addition to the experimental evidence, rapid formation of stratified sedimentary rock has also been observed at the site of the Mount St Helen’s Volcanic eruption in Washington State in 1980. The eruption is sometimes called “God’s Gift to Creationists” due to the clarity with which it demonstrates this.

For the big picture here, we should look at something vast like the Grand Canyon:

Here you can see sedimentary rock layers that were laid down in water, over a mile deep and extending over hundreds of miles. Globally, geologists see the same rock layers extending half way round the Earth. (These layers have been named as Jurassic, Carboniferous, etc, by Uniformitarian Geologists, who think they were formed extremely slowly during different ages.) When you add to that the fact of spontaneous stratification it should be apparent that the rocks are indeed crying out, but not about millions of years. They are testimony to a massive global flood. Jesus said that if people keep quiet, the rocks will cry out.

See more information on Mount St Helen’s and other Creation/Evolution issues see the Creation Science sites listed  here. When you have time, a good video both for revision and first-time exposure to Creation Science is the One Hundred Reasons Evolution is Stupid video, or the less humorous but more heavily scientific Evolution’s Achilles’ Heels film – three minute trailer here. Full film on the Science Page here.