The hijack of Christianity by Church some 1700 years ago is its most significant event since the Crucifixion. Even though it’s a long time ago, the effects have knocked on down the generations until today. The key is the fake conversion and skilful manipulation of the Roman Emperor Constantine. Today’s Churches accept his Conversion as genuine, since they are the fruit of his works. Here we look at the historical background. 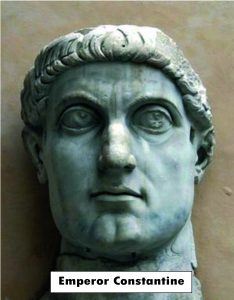 In the first three hundred years of Christianity it seems that the number of Christians approximately doubled every fifty years. This is remarkable growth for any movement, never mind one that endorsed and followed an executed provincial criminal. Christians endeavoured not to constitute a threat to anybody; they were gentle and cared for others, including pagans. However, they could not worship the Roman gods, and also, it seems, frequently refused to use violence or to serve in the army. For the violent and warlike Romans, these were not only threats, but major threats given the rapid growth of Christianity. It is possible that by the time of Constantine Christians made up as much as one eighth of the Empire’s population. Doubling every fifty years would make that one half in another hundred years. A remedy had to be found.

The Third Century was a bad time for the Roman Empire. Historians call the period from 235 to 285 the “Crisis of the Third Century”. That’s a long crisis! In brief, the Romans were regularly killing each other in addition to their external wars. The man who brought the Crisis to an end was Emperor Diocletian. He achieved a large element of control over the whole Empire, but only at the cost of a four-way division. Two Main Emperors and two Assistant Emperors, who had the titles “Augustus” and “Caesar” respectively, ruled the Empire. This period is called the Tetrarchy or “Rule of Four”. 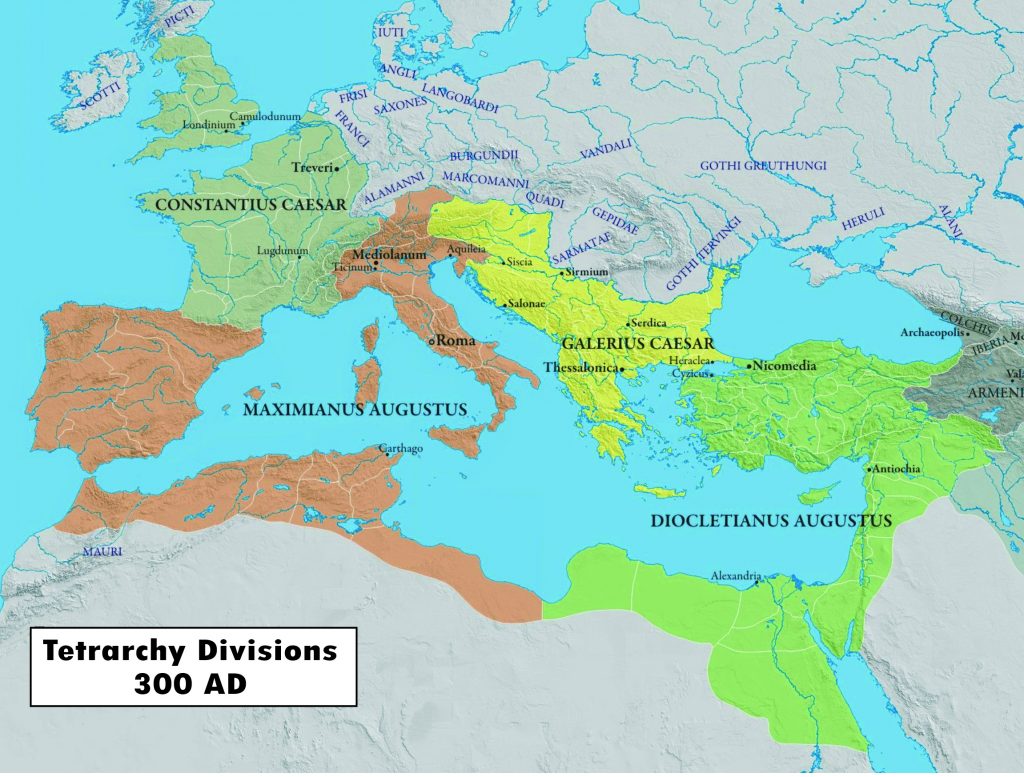 The Rise of Constantine

Constantine’s father was the Caesar of the Western Empire. Constantine himself travelled East as a young man to serve under Diocletian. Hence he was in a position to observe the Diocletian persecution of Christians, which was the worst ever by Rome. He will also have observed that it did not work; persecution seemed only to increase the strength and growth of Christianity. Some other solution to “The Christian Problem” was needed. 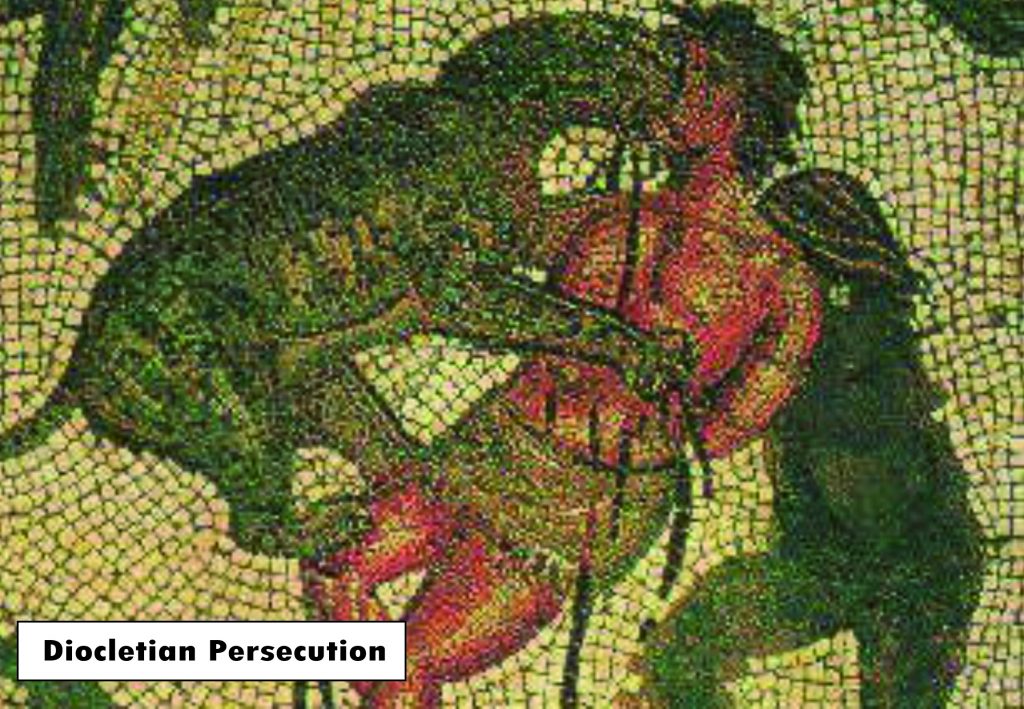 Constantine’s father achieved elevation to Augustus of the Western Empire, but died shortly after. At that time Constantine himself was back with him in York, England, and he became the new Augustus. He was exceptionally capable both politically and militarily, and extremely ambitious. He knew the Tetrarchy was always prone to civil war when one of the four Emperors sought more power, and aimed for total power himself. His success here would fully unite the Empire once more. If he achieved that there would then be the Christian problem to deal with.

Constantine fought against his last Western Empire rival at the crucial Battle of Milvian Bridge in 312 AD. His famous order for his soldiers to put the cross or the Chi-Rho (an alternative Christian symbol) on their shields was something of a no-brainer. It meant he was able to claim that he fought for Jesus. If defeated he was certain to be killed anyway; if he won he was then in a good position to co-opt Christianity, rather than attempting another, probably counter-productive, persecution.

It is clear that Constantine’s conversion was fake. In addition to the matter of his motivation, he never accepted Baptism until he was on his deathbed; he perhaps saw that as an “insurance policy” in case Christianity was true. Throughout his life he supported Paganism, even to the point of changing the Day of Rest on the Sabbath, the Seventh Day, to Sunday, the day of the Sun God. 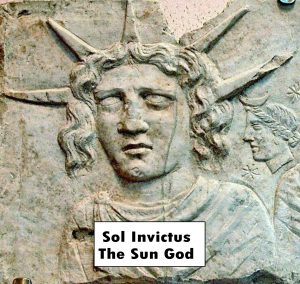 This was done at almost the same time that he convened the Council of Nicea, where he put himself at the head of Christianity. The reason we take Sunday as a Day of Rest now is because of Constantine’s command, which clearly shows his huge influence right down to the present day. Further, his political manipulation and battles were an obvious contradiction to Jesus’ statements about love for enemies and the meek inheriting the Earth. Constantine’s life was about winning and then consolidating political, military and spiritual power. Yet today’s Churches must accept his conversion as genuine, since their own legitimacy depends upon it. (See also “Church” is a Mistranslation.) In accepting it, they buy into a religion that seeks organisational power, and often State Power, and readily approves of war.

Following his victory at Milvian Bridge Constantine was able to draw Christians into his new Universal or Catholic (Catholicus in Latin means universal) religion; the beginning of the Roman Catholic Church. Naturally there were those who objected. However, over time and with the assistance of some key people such as “Saint” Augustine, the Church prevailed. There was a merging of Christianity with the State. Christianity was also sucked into Roman materialism, with very large and very elaborate church buildings. It was saddled with a heavy Hierarchy, with the chance for someone to be the “Top Christian”, having a comfortable life and much power. Since then Christianity has been associated with power, with government, with warfare, with violence and with wealth. Constantine was the founder of “Christendom”, which is short for “Christian Dominion”. This is a complete contradiction to the doctrine of the Kingdom of God, which is within us rather than concerned with external power. Whether it is “Catholic flavour” or “Protestant flavour” makes little difference. Luther was happy with the head of State being head of the Church. Calvin even made himself Head of State. Both used violence, and their followers, such as Cromwell, Knox, or the Puritan Pilgrim Fathers did too.

As stated above, Constantine lived a very long time ago; but the effects of what he did are with still us today. Scan the Homepage here for a different view of Christianity.

PLEASE NOTE. This is not saying that there has been zero benefit from the Churches. People who are fully convinced of the Gospel naturally gravitate first to a Church; and even paganised or Calvinist Churches can still play a role in alerting people to the Gospel. In fact, much of the World has come to hear about Jesus through various European Churches. It’s a complex picture, but one in which knowledge of the failings of the Churches is essential to any real understanding of Christianity.